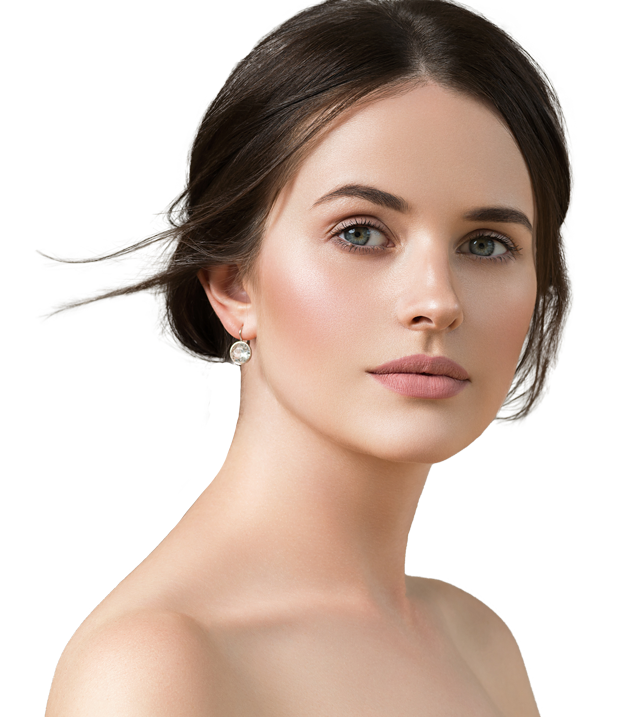 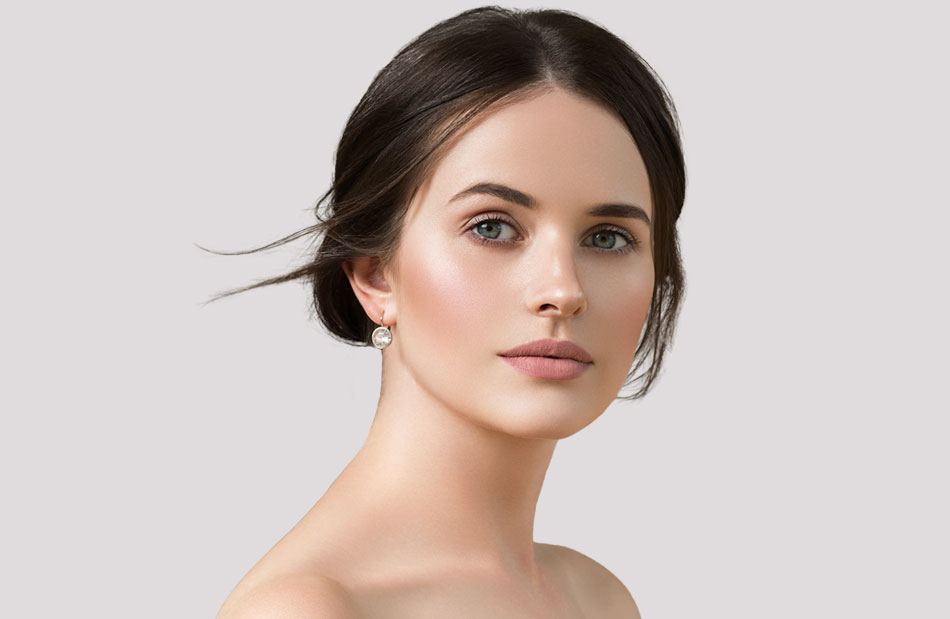 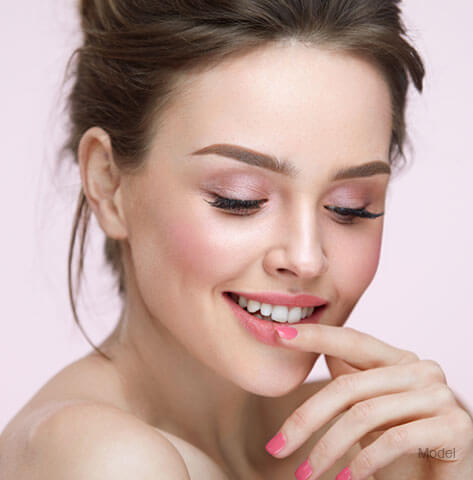 With age, our upper eyelids skin loosens and sags. The upper eyelids also lose volume due to the process of fat atrophy. The lower part of the upper eyelid known as the “eye shadow space” is obscured by the skin that folds over it as time progresses. In addition and at the same time, the portion of the upper lid centrally, located near the nose bulges, as the fibers that previously retained the fat loosen.

The cause of eyebrow descent is complex and, in part, is due to the loosening and stretching of the retaining structures that originally kept the forehead and eyebrow tissues in the appropriate anatomic location. However, however an additional cause of eyebrow descent is the result of a deflation like phenomenon that occurs as fat atrophy is seen in the soft tissues beneath the eyebrows themselves. If one looks at fashion magazines one will note that the soft tissue in the area above the upper eyelids and underlying the eyebrows is actually quite full in young attractive women (and some men) and when the face is seen from the side this area is actually convex outwards creating an outward rounded appearance. However, as the loss of soft tissue volume occurs with age, this area becomes flatter and with the deflation of this tissue the eyebrow sags down and over like a deflated balloon.

Forehead soft tissues also experience the occurrence of wrinkles both static and dynamic. Dynamic wrinkles and lines are those that are seen as one animates (moves) the parts of the face, in particular the tissues surrounding the eyes. Again, dynamic wrinkles or lines are only seen as a result of motion. Static wrinkles, on the other hand, are those that occur as the collagen in the skin is remodeled over time. They are present all of the time. To some degree static wrinkles are the result of repetitive dynamic wrinkles that results in a reconfiguration of the skin and soft tissues after multiple episodes of soft tissue bunching and folding and over prolonged periods.

The most vexing of these wrinkles are the dynamic and static ones that occur between the eyebrows. This region is referred to as the glabella. These are the wrinkles that are most commonly treated with Botox, but also are dealt in a more enduring and satisfactory fashion with a portion of the brow lift procedure. There are also horizontal wrinkles and lines that form between the eyebrows and the scalp hairline on the forehead. The horizontal lines that are found in the four head part due to reflexive elevation of the eyebrows, which is exacerbated as additional tissue piles up in the upper eyelids. These horizontal lines on the forehead represent the muscle trying to elevate the soft tissues to clear the visual field. Upper lid blepharoplasty and repositioning of the eyebrows to a more natural and anatomic position results in the muscle having to exert less activity. This is the mechanism by which the forehead lines or wrinkles are ameliorated with an endoscopic brow lift.

Upper lid blepharoplasty (incorrectly dubbed an “eyelid lift”) is designed to treat the problems of the upper eyelids that occur within advancing age. A small amount of fat in the inner corner of the upper eyelids toward the nose is removed. However, beyond that additional fat is not removed. Instead the remainder of the fat is repositioned and brought closer together so as to create a modern characterized by smooth, convex, and full (almost “pillowy”) upper eyelid. This configuration is the modern interpretation of an appearance of youth and femininity. Additionally excess skin is precisely removed leaving a refreshed appearance and presenting an eye-shadow space as a platform for the application of makeup.

Furthermore at the time of performing the upper lid blepharoplasty ptosis can be corrected thus creating a truly more refreshed appearance. Ptosis is a condition in which the eyelid position relative to the globe (the eyeball) is lower than normal. Ptosis is a different condition than excess skin in the upper eyelid. It relates to an inappropriately low location of the eyelid margin itself. Adjustments the location of the eyelid margin can and in some cases should be made at the same time as an upper lid blepharoplasty. The process of making this anatomic adjustment is known as ptosis correction. This is an advanced procedure, that those with additional training in oculoplastic surgery are skilled at performing.

The lower lid blepharoplasty is one of the more powerful procedures when considering facial rejuvenation. It is designed to increase smoothness of the lower eyelid and additionally helps elevate the upper portion of the cheek. Again, recall that the lower eyelid should segue or blend into the upper cheek. That is to say there should be a blended lid-cheek junction in the central midface. Thus, almost every lower lid blepharoplasty that I perform inherently includes some component of an upper cheek left. The reason for this is that the two procedures are synergistic and in terms of bringing about that blended transition so important in creating a natural appearance of youth. Another important of the lower lid blepharoplasty is the management of the lower lid fat compartments. This fat is important volume that is not removed, which would create a hollowed-out appearance, but instead is repositioned. The repositioning of lower lid fat of that helps restore youthful volumes, contours and transitions. A small amount of excess skin is removed. It is very important that the amount of skin is minimal and precise so as to avoid retraction and not positioning of the lower eyelid.

I’ve spoken of the upper and lower lid blepharoplasty in combination with endoscopic brow lift as the upper third facelift. The upper third face lift refers to a process of aesthetic facial rejuvenation that focuses on the upper third of the face, spanning the area between the anterior scalp hairline and the lower eyelid – cheek junction. This important facial aesthetic zone includes the forehead, the temples, eyebrows, upper eyelids, lower eyelids, and upper cheek. This is an area containing important facial features responsible for significant facial express and powerful non-verbal communication. Yet at the same time, it is one of the facial regions that first demonstrates the signs of aging.

In truth the portion of the combined procedures listed above that brings about the changes most characterized as an upper facelift is the brow lift. The most common form of brow lift in my practice is the endoscopic brow lift. The second most common is the Mini Brow Lift which can be performed at the same time as an upper lid blepharoplasty. While I do perform other types of brow lifts (conornal, temporal subcutaneous, etc) on a less frequent and customized needs-based basis, I will confine my description of brow lifts to the endoscopic brow lift.

The important focus of endoscopic brow lift is repositioning the eyebrow to a position of youth. It is important that this be done and natural fashion so as not to create a surprised appearance. In addition to repositioning the eyebrows, the forehead and the temples are also addressed. Through the process of restoring natural anesthetic look and function the forehead muscles are precisely re-aligned thus permitting those muscles and the overlying forehead skin to relax. This relaxation results in the natural reduction and softening of the horizontal forehead lines and the avoidance of the frozen mannequin look that is associated with the overuse of Botox in this area. The vertical oblique lines between the eyebrows known as the scow lines or eleven lines, are also addressed according to the individual patient’s desires.

The results that are brought about with the endoscopic brow lift, the natural brow repositioning, the softening of forehead lines, and the elevation of the temple and lateral upper eyelid, and the even upper cheek, is synergistic with the upper lid blepharoplasty. These were synergistic because the combined fashion they reduced crowding of the lateral tissues of the eyelid region by addressing the excess skin. However the benefits extend beyond the eyes and eyebrows to the lateral temple and in some patients these benefits extend into the lower eyelids and lateral cheek.

The endoscopic brow lift incisions are quite small and are confined to the non visible locations in the hair of the scalp. Their locations are carefully chosen to allow access to the majority of the upper third of the face. I prefer to use a five port (five incision) technique over the standard three port technique. Recall that the incisions are hidden within the hair so the additional two incisions don’t represent a practical increase in “scar burden,” but these two additional ports permit additional access that augments the rejuvenating power of the endoscopic brow lift procedure. This extended access allows treatment of the lateral temple, the lateral cheek, and even the lateral portion of the lower eyelids and upper cheeks.

The comprehensive effect of the endoscopic brow lift on the upper third of the face compliments the specific focus of the upper lid blepharoplasty on the eyelids and more importantly when performed in combination with the facelift/necklift lift complements the changes seen in the lower two thirds of face. It is for this reason, I like to think of the endoscopic brow lift as more than just a brow lift or method to reposition the eyebrows but truly as an upper third facelift.

1. Performed by a surgeon with occuloplastic fellowship training and advanced experience with managing cosmetic issues associated with the eyelids and eyebrows.

2. Holds a certificate of advanced occuloplastic surgery training signed by one of the “grandfathers” or “giants” of modern occuloplastic.

4. Experienced with ptosis correction to enhanced the natural refreshed appearance with blepharoplasty when indicated.

8. Control and restoration of upper cheek position when performing lower lip blepharoplasty so as to create a blended the cheek junction.

It is my experience that the recovery from the combined procedures of upper and lower blepharoplasty plus or minus the endoscopic brow lift is generally not very different in terms of timing and amount of discomfort from the face and neck left. However there is one caveat or exception worth mentioning. Some patients undergoing lower lid blepharoplasty experience lower lid and upper cheek swelling that last longer than swelling seen in procedures in other parts of the face. The swelling of which I speak is not excessive in amount or duration but it is a little more remarkable than other areas. Thus I like to tell patients that it is the lower lid blepharoplasty that determines the overall extent of the recovery phase. However, because the results of the lower lid blepharoplasty are generally powerful the increased recovery time is seen by most patients as justified. In general it should be stated that the performing periorbital procedures (upper/lower lid blepharoplasties and/or endoscopic brow lift) at the same time as a facelift/necklift does not per se increase the amount of recovery or discomfort in an significant or meaningful fashion.